Four years ago today, I sat in the park with my new girlfriend (now my wife), kissed her for the first time and then walked over to C4CC to pick up the suitcase, laptop bag and ukulele that would be my items of stability over the next year while I experimented with living with friends, colleagues and strangers.

I used this blog to tell you what I’d been doing but also to say “Hi, I’m here, but I’m ready to be somewhere else, do you have some work I could do?”  It was a great exercise, a stretch for me.  I gained humility and confidence in the value of my work.  I learned how to ask for what I needed and I learned about what happens when you present yourself as in need.  Throughout the year, people assumed that openly asking for help like this equated to helplessness.  And then I experienced three basic forms of reaction:

It’s a well-recognised and strong dynamic.  But the year, in the end, turned out to be a daily practice to step out of the whole drama triangle dynamic, to let go of being helpless and with it let go of being bashed or rescued. 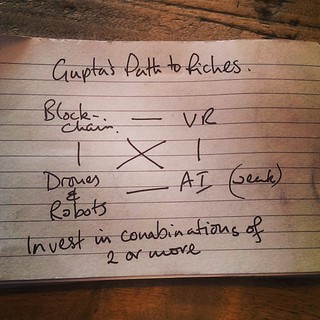 A couple of months ago at Tuttle, Vinay expounded on his recommended VC strategy: invest in any startup whose product combines two or more of the following –

It’s been rolling around in my head ever since.  Of those people who are working on any of these, I think they’re mostly focused on a single silo as core – so when a VR company does something controlling drones, they’re probably just using drones as a use case rather than thinking “We’re in the Virtual Reality Drone Business.”

I think.  I don’t know enough of them to know.

But I do think this stuff is worth knowing more about because they all feel like unstoppable strands of the near-future.  They all feel like the internet did twenty years ago – yes you’ve heard of them, you know people are doing stuff with them but what really is that going to do for me?  And the combinations with other technologies are quite hard to think about because of this.  Even fifteen years ago the people saying that the future of the internet was mobile phones seemed to be few, probably right, but possibly nuts.

Here’s what I think is interesting about each.

Virtual Reality: means we can visualise and interact in some way with stuff that doesn’t or can’t exist in reality or we can make things that do exist look different, easier to interact with or more palatable.  Using sensors in the real world we can also mix things up, what we call “augmented reality”

Drones & Robots: I heap these together with devices on the network whose primary function is not computing (or computing as we know it)  they are machines that do stuff for us and replace some part of undesirable human labour, ultimately allowing us to do stuff we just could barely imagine before.

Artificial Intelligence: the “weak” modifier is important here, we’re not talking about sentient computers, rather things like voice recognition, machine translation, helpers like siri.  This is the software version of human-replacing robots.  Get a machine or a network of machines to replace some thinking-like function: decision making or sensory recognition or pattern matching.

Blockchain tech has started off by replacing currencies, but it’s becoming clear that the generalised form of bitcoin – a distributed ledger that gets its authority from the consensus of the network is a candidate for replacing all sorts of centralised databases and thus making all sorts of human activities in firms look horribly inefficient and redundant.  The best corporations may turn out to have been relatively inefficient cyborg machines weighed down by their meatware compared to a Decentralised Autonomous Organisation.

Within these silos, each of these technologies are on the road to being mainstream – it’s those combinations that make me think.  A robot that senses and makes decisions about its environment through a virtual reality interface but ultimately controlled by a DAO sounds Terminator-ish.

But there’s another thing.

In all technology, we face a tension between our desire to make life easier by replacing human labour with code or machines and our attachment to human labour as the primary sense-making tool of life and the means by which most of us get the things we need to live.

We seem to understand that work is changing but most of the #futureofwork stuff I’ve seen assumes capitalism based on corporations as a given.

I do have an opinion on this, I think we need fewer jobs and to really accept that people don’t need any more to work as hard or as long doing stuff to justify staying alive.  What I want to do more though is point out the incongruity that our tech efforts go into replacing human labour but our politics, culture and society, our communities and social interactions assume that everyone should have a job or some easily understandable means of income like owning or a company or assets that create value.

I spent a year a little while ago not living how most people live.  I lived out of a couple of suitcases and moved around, asking for work and places to stay through my social networks.  More than once I was asked “What if everyone wanted to live like this?”  At the time, I took this as an admonishment mostly, as a way of saying “You’re taking advantage of our work which has gone into acquiring this space for our use.  You’re working and storing it in social capital rather than in bricks and mortar or a career path, but we can’t all do that can we?”

Well, what I’m asking now is “What if we all have to do that?”  What if we make a huge leap in replacing types of work? What if, in the British economy, we made things that made our Financial and Professional Services as “not economically viable here” as coal-mining, steel work or mass manufacturing – the things that were the cornerstones of our economy when I was a child?

Whatever happens, it will be in the context of big demographic change too.  A lot of the way our bit of the world looks is down to the post-war baby boom.   All the boomers are over fifty now.  They’re going to die in the next twenty, thirty, forty years (me too!)

How’s it all going to work out?  Is this all what we really want?  Would knowing how the world is now have helped us at all forty years ago?  Can we just pause and check?

I think we need to talk a lot more about these things.  Tuttle is one place, but I’m going to be making time for other ways to engage over the next few months.  Please join me.