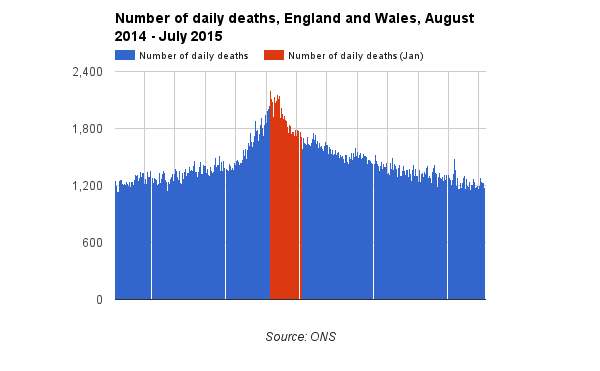 We have seen some cultural icons pass in the last month.  And whenever we hear of another individual death, we’re tutting on social media and giving January 2016 a bit of a hard stare.

It’s had me thinking about death, how it’s always a surprise even though we know it’s coming.  How the War Babies and Boomers are getting older and will naturally be starting to disappear and what it also means about our culture.

First of all, January.  Yes January is a bastard.  Even if you’re well it’s long and dark at our latitudes and I think lots of people who aren’t so well decide consciously or not that they’re not up to sticking around for another winter.   From the ONS Winter mortality statistics from England & Wales you can see that January 1st was the number one day to die in the period 1/8/2014 to 31/7/2015 and that January was the peak month for deaths with just under 60,000 people. 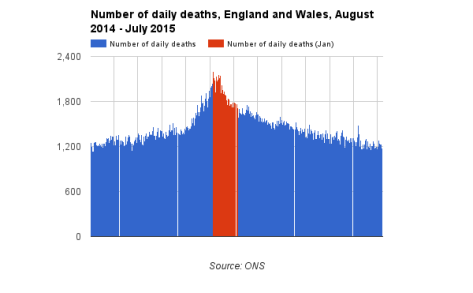 But what about Bowie, Lemmy, Rickman etc?  Well they’re the early-ish ones of a much bigger trend.  Although life expectancy at birth for males in the UK is currently about 78, back in the late forties it was 63-64 (presently ONS don’t produce life expectancy tables for people who took extremely large amounts of drugs in the seventies like Bowie and Lemmy).  A bit like house prices, most people have come to expect average life expectancy to keep going up even though they realise it can’t keep going forever.  Sooner or later everyone who had a top ten hit during the sixties and seventies will be dead, shortly followed by everyone who bought a copy of said hit.

And during the sixties and seventies we had something that we hadn’t had before and haven’t had since – the primacy of youth.  If you look at the people playing on number one hits during 1965, for example, most of them are aged 25 or under (the youngest was Dave Davies of the Kinks who was just 18, the oldest was Ken Dodd at a venerable 38).  That means we have a bubble of very famous people all around the same age who will probably be dying in the next few years.  We’ll have to get used to losing our heroes.

[Help me improve this.  Can you see better ways to use available data to make the point?  Can you see some more important points to make?  Pointe them out, let’s improve it together.]