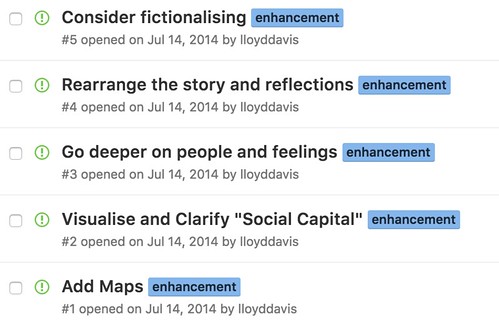 As a person who enjoys programming and programming culture (I can’t call myself a programmer anymore) I love github. It’s amazing to me that open source software has taken such a hold on imaginations that there’s this open versioning system that allows you not only to read other people’s code but to report issues, suggest amendments and even re-use the code or start a whole new project based on it (subject to the licensing terms of course).

I’ve been ruminating for a while on hacking this infrastructure to allow creative collaboration on materials other than code. What would it look like if the end product of a project weren’t a program or a web app but a book or a movie? How could you get people working on books and movies in the same way as people work on open-source software? And if you couldn’t, I mean if it just wouldn’t work, then why would that be? What is so different about the movie or book product that makes it incompatible with the git/github environment? Are there better environments, ie more suitable to traditional writing or film-making? Or is there a new kind of book/movie/story/whatever that is enabled by this sort of collaborative environment? Who else has done anything about this already? And my standard question at the start of all projects “Why is what I’m suggesting dangerously wrong and how are you going to stop me?”

I’ve started working on a few projects to open these questions up. Two of them are my travels across the USA – Tuttle2Texas took place in March 2010 and consisted of a few Tuttlers travelling by rail from Boston to Austin and I then went on to Los Angeles. Please Look After This Englishman (PLATE) happened a year later and was me travelling through my online social network without much of a plan except to arrive in San Francisco on March 1st and leave from NYC on March 30th. Both projects were heavily blogged and tweeted, there are photos galore on Flickr and some bits of video that I shot. I wrote a summary of the first trip in daily instalments (I’ve had a go at doing it here too, but it doesn’t inspire me so much) and I made a one-man show out of the second trip and an e-book out of the blog. I probably have notes and artefacts from both trips hanging around in archive boxes or plastic bags in someone’s garage or something. I’m also starting a new project – Wood Lane with a series of video clips and some writing. This differs from the others in that it’s been conceived from the start as something that would live and evolve on github from the start.

I’m looking at what products I might make out of the material. You might look at that too – what could you do yourself or how could you help shape what I’m doing? People like products, packages, ways of bundling things together in ways that make them look like other things. But you might have an idea for something else.

These are the aspects of github that I think could be useful to us as potential collaborators (there may be more):

This, for me, is the place to discuss what’s wrong with the products so far. Anyone can raise an issue and anyone can act on them. You’ll see that on the PLATE repo I’ve raised a few issues as “enhancements” ie suggestions for the next version. Other issue labels are “bug”, “question” and “help wanted” I’d love you to raise issues.

What does this mean in the context of a non-code-based project? I think it means you’ve come up with something that you think should be integrated into the core project. A pull request gives us an opportunity to discuss that and decide whether that’s something I want to do as the core artist or whether you should fork and create your own.

A fork might come up because we decide to as a result of a pull request, but you might also just want to use my material as a jumping off point for your own version. Or to incorporate some of the material into another project. I’d see that as a fork – it’s a way of keeping track of what derivative works there may be.

I wrote a home wiki page for PLATE and then forgot about it! I suppose wiki pages could be anything – profiles of contributors, ideas for new ways of interpreting the material, just a collaborative writing space that’s directly linked to the code and the rest of the project, a project blog – all of these, you’re welcome to try new stuff!

Dive in and get involved

Don’t let ignorance of git or github (or of anything really) stand in your way. If you’re interested we can overcome all that. Let’s see if we can create something interesting together.

So yeah, if you have any questions, do comment here (wherever you find this), but I’d rather you dived in and made a wiki page or raised an issue on the appropriate repository!