THERE ARE DAYS WHEN I SEE THE TASK AND GO “YUK, I DON’T KNOW WHAT I’M GOING TO DO” AND THEN SPEND HOURS THINKING ABOUT IT AND OTHERS, LIKE TODAY, WHERE I KNOW IMMEDIATELY WHAT I WAS GOING TO DO.

Today was “WasteCraft” – which is inspired by Ian Willey‘s workshops of the same name. Ian’s great at seeing the potential for applying old and new making skills to working out how to deal with stuff that we at best recycle and at worst, throw away.

In particular today, I knew that I wanted to do more on my “Origami Paper from Take-Away Bags” project.

Previously I’d taken a Caffe Nero paper bag (my wife got lots delivered during lockdown) and chopped it up because the weight and finish of it reminded me of origami paper. And then I turned it quickly into a simple little box. It’s the kind of box that you might put paper clips or other small things in. I usually have at least one on my desk to catch pencil sharpenings. 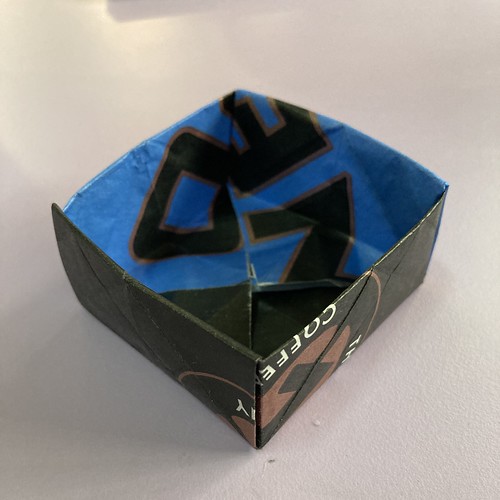 But I needed to do a bit of research before going into full production and turning the whole pile into folding fodder.

So I carefully unpicked one of the bags. OK I got impatient and wasn’t as careful as I could have been. The main enemy is the glue. The schoolboy stamp-collector in me wanted to try to melt it with steam, but then I’d probably have had to do a risk assessment or been in contravention of the Health & Safety at Work etc. Act 1974. I’ll have another go at home where my employer is less worried about such things. I also need to try perhaps seeing if the glue melts under a warm (or hot!) iron because sooner or later this paper’s probably going to get iron pressed flat anyway.

But for now I just let it tear and leave some bits stuck together. It’s a case of undoing some of the seams and removing the bag’s handles (which are also paper, more in a moment) to get to a single, rectangular piece of paper.

I don’t seem to have taken a picture of a finished rectangle, so here’s one just unfolded with the handles still attached.

I measured the unfolded bag and found it to be 670mm x 340mm which means 8 square sheets of not quite 170mm each. I can accept the “not quite” in the name of minimising waste.

So my squares will have 17cm sides.

The handles are just folded paper and rather than pull them apart I’m quite attracted to them as square straws (300mm long) even if I don’t have an immediate idea of what to do with them.

So then I took the guillotine to it and produced 8 x 17cm squares – some of them torn, they all have at least one perforated edge that’s presumably from the machine they’re made on – I might trim it off, I might keep it, there’s not many origami folds where you end up seeing the actual edge of the paper.

And then I realised that I’d been assuming (silly me!) that the Pret A Manger bags that I had (there are fewer, but still enough to work with and introduce some variety) would be of exactly the same dimensions.

No, no! turns out the long side of them is about 11cm longer than the Nero bags, so there’s going to be some left over, one way or another.

Sadly although I learned a lot, and have written more about today than ever before, I didn’t quite get round to actually making something out of the paper squares yet, but there’ll be another day for that soon.