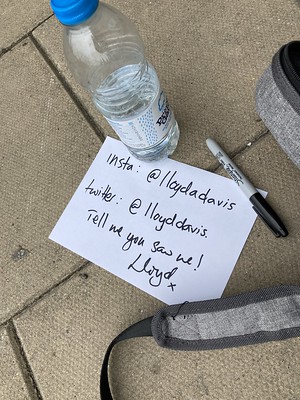 I put today’s gig in the book late in November 2019. Just after a holiday in Iceland, my last flight and last trip out of the country. It came out of one of those random conversations on Twitter – someone said something like “do I know anyone who’s a busker?” to which friends of friends said “@lloyddavis” and we took it from there.

But today, having stuck a tickling stick up my nose and getting the all clear, masking up and braving the (delayed, natch) trains of the Southern Region, I toddled off to the coast to entertain the folk while they queued up to get into the Brighton Centre for the brightonseo conference.

I had a coffee afterwards with my old pal Al Robertson (who turned out to be a delegate at the conference) and then had a little walk around post-COVID Brighton, had a quick lunch and then toddled home again, tired, but happy.

I had to take a lateral flow test and be able to show a negative result this morning in order to get a wrist band that let me into the building. I don’t mind doing this – especially since it turned out negative… – but it’s not a great thing to have to do at 10pm, let alone with the prospect hanging over you of it being positive and so not only losing the gig, but also having to isolate and worry about who I’ve been in contact with in the last few days. But also, it’s incredibly fake-able, if you really want to – you do a test at home, fill in a form to report the result and then get a text from the government saying yes, you’ve reported a negative result. So if you’re on a very low income and the opportunity to work comes up for the first time in 18 months and you haven’t ever had any symptoms but you get a positive test, the pressure must be huge to just go “nah, I’ll report it as negative, no-one will know.”

I’m really out of practice in the social niceties of going somewhere else. Partly because I wasn’t sure until 10 o’clock last night that I’d be going, but also because I just haven’t been anywhere on this basis (a little bit of work that might have been nicely rounded out by seeing some friends). In the olden days, I’d have been open about it on social media and messaged the people I know in Brighton (probably all of both the Sussexes) to see if we could say hello, but it just didn’t occur to me until this morning.

I’m also out of practice with being fully prepped for a public gig. I need to have a good sign and a range of ways for people to tip that don’t involve cash which people just aren’t carrying around any more. I need to have plenty of water and give a bit more thought to repertoire – I’ve got a standard busking set, but ordinarily I just, um, busk it – ie I don’t worry too much about repeating songs or starting in the wrong key, none of which is terrible, but it puts me off my stride, reduces my confidence and what people want to see is cheerful confidence. And I need to think a bit more about what to wear – today was the nightmare, British cold misty day after a few days of hot sunshine in September, the weather when I left home was different from the weather when I started playing which had brightened up a bit by the time I stopped playing.

But mainly – It’s bloody great to be out performing again. I just stood outside the main entrance to the Brighton Centre and played and sang and made people laugh and helped them feel a bit more OK about going out to something like this, perhaps for the first time in a few months. I really hope that this isn’t an awful super-spreader event that I should, with hindsight, have known not to support, but it felt good to be out being me in the world after so long. Oh and invoice!