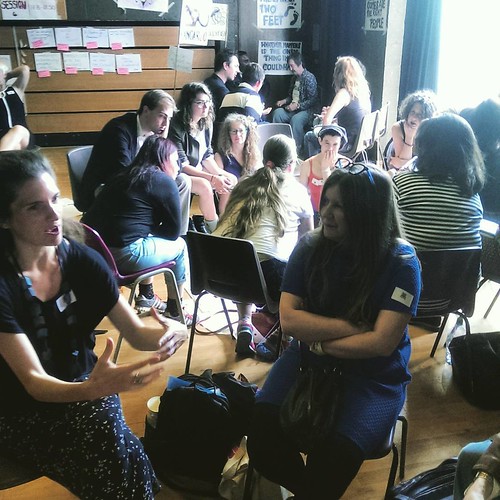 Thank you everyone who commented on the previous post – wow!

This reminds me very much of what happened when I wrote my original Social Media Cafe post – I had an idea, I fleshed it out a little and then people went and took it seriously 🙂 Which of course, in truth, was my intention, but I still cling to a little English self-deprecation and false modesty.

I also feel the need to remind newcomers here, that I consider this blog to simply be my thinking ground, this is where I get to understand what I think and why – that’s why I write. Then it’s great also to hear what others think of what I think, because it helps me clarify that through conversation. You may think me mad or a pointless dilletante. There’ll be reasons for that.

I also want to let you know that I am comfortable holding the apparent paradox that I am both entirely committed to following through on this *and* consider it a thought experiment and social art object.

I had some good chats about this at Tuttle today too, it certainly seems to have caught some people’s imagination. The question now is what to do about it.

I think I need to explain some other things more.

Firstly, let’s be clear, there is no election currently being held that I’m interested in standing at. After I posted yesterday (and doubtless as a direct result) Julie Kirkbride announced that she would not be standing at the next general election, but that could still be quite some time off yet.

I believe that if an election were called tomorrow, and if I could garner enough financial support to cover my deposit and living expenses for the three weeks or so until the vote, I would stand, if only for the experience of doing it – I may start a fighting fund for just this purpose.

However it is unlikely that Gordon will go to the country so soon and so I’m asked what I’ll do in the meantime.

We’ll see. I’m not in a position to put all of my time and energy into building a base in any particular constituency. I am not, today even sure of where I might stand, I need to think about where I really feel I could be of most service.

What is clear to me is that the three themes that I’m interested in exploring are Service, Representation and Governance. What does it mean to serve a community, how can one person best serve several thousand at a national level? Who do MPs represent and how does it really work, how could it work? If they are there to represent the interests of their constituency why do so few people feel represented or feel inspired enough to turn out to vote? And what does governing a country mean? How do you “run” a country? Is there room to start running it in the way that large swathes of the internet are “run” on a far more decentralised and libertarian (with a small ‘l’) basis?

The party question is an interesting one. Many people have said something like “if you want to get elected, why not join a big party, you have much more chance that way” to which my response is that the overall purpose of this is not to win a seat at any cost. But in that case, why would anyone vote for me, don’t we vote for the person we think has a good chance of winning or else for someone who represents a party that we’d like to see forming a government? Well, yes, we do but that doesn’t mean it always has to be like that or that it has to be like that for every constituency. And anyway this sounds like the people who said, “why would anyone want to go to your social media cafe?” which elicited a “well if
you don’t know I can’t tell you” kind of response from me. It turns out

And another thing. What do you do with supporters who aren’t voters? There are some lovely people who’ve said, I can’t vote for you, but I’d love to help in any way I can. What role is there for such folk, especially if a large part of the campaign is online. Perhaps there’s an example in the Obama campaign and what contribution people from overseas made to his success – anyone measure this?

It has shown me how I think differently about the world from other people. I am quite convinced that we do not know what the future holds and that the economic situation is so shocking to many people not because of the severity of its effects but because their illusion that they knew what was coming up over the next year, and that it included their house going up in price, their job paying more and prices remaining pretty stable has been shattered. So I find attractive the idea of coming clean on this and giving up the idea that you’ve got to know everything you’re going to do before you get started.

I was also interested in the fear and smear factor that Terence brought up in the comments. Most of the things he talks about, I’m quite comfortable with. I think the issue is how perfect do we expect our representatives to be. Is government just a game where we put people on a pedestal, cultivate extreme and unrealistic expectations of them and then gloat when they fail, in order to make ourselves feel better about our own falings? Possibly. Is that something we want to spend so much time, money and energy on or is there a better way of doing that? Not me.

I think overall, my point is “Let’s stop talking about what the job is, what it has become, but rather get back to what we want and what sort of people can deliver that”

I was most relieved however that Ewan Spence recognised that I want to find a way of taking this seriously without being too serious and pointed me to the advice of the Monster Raving Loony Party.