Priya Prakash from Design for Social Change came along to our third Future of Work event at Truphone to talk about how work might change when some of our colleagues are a network of sensing machines talking to each other.

At all of these sessions, we’ve ended in a circle asking people to record their reflections.  Listening to this should give you a better feel of what it was like in the room.

If you’ve written something about the evening or inspired by your conversations, do let me know.

We started the second Future of Work event with an introduction to Mycelia from Imogen Heap.  If you haven’t read it yet, the two-part interview she did on Forbes is a great starting point.  In a nutshell, she calls it “Fairtrade for musicians”  it’s intended to be a way of using smart contracts on the blockchain to manage metadata about an artist’s works (including that important metadata about price and how money gets distributed after each sale).

We finish each evening with a circle where we pass around an audio recorder to capture people’s immediate reactions.  Have a listen to get more of a feel for what it was like in the room.

If you were there and have written anything about the evening or inspired by your conversations, please do let me know so I can spread the word.

This was the first of a series of evenings at Truphone looking at the future of work in the context of four currently maturing technologies.  We started off with a focus on Artificial Intelligence and were given a great overview by Benjamin Ellis of Redcatco.

We finish each evening with a circle where we pass around an audio recorder to capture people’s immediate reactions.  Have a listen to get more of a feel for what it was like in the room.

David Terrar did a write up for the Agile Elephant Blog.  If you were there and have written anything yourself, do let me know and I’ll add a link.

Last Thursday, we kicked off a series of evenings at the offices of Truphone with James Tagg leading a romp through the current thinking about the future of artificial intelligence in the context of mobile, ie “When will your smartphone be smarter than you?”

We then went into a short open space session with people suggesting conversations about “How & when the laws of robotics will apply to smartphone AIs”, “How can AI be used for creating world peace?” and “What does the AI world really look like in 2025?”

I managed to catch a few snippets of the conversations:

The format worked well, here’s audio of the final circle (a sentence or two from everyone who wants to) many people said it was very refreshing and stimulating to have a chance to talk about what they wanted to talk about while also having plenty of time to quiz James.  Last night we returned to Artificial Intelligence again, but this time, helped by Benjamin Ellis, looking through the lens of the Future of Work (which is the overall theme for the four remaining sessions) and after that come Blockchain, Drones Robots & IoT and Virtual/Augmented Realities. Do join us! 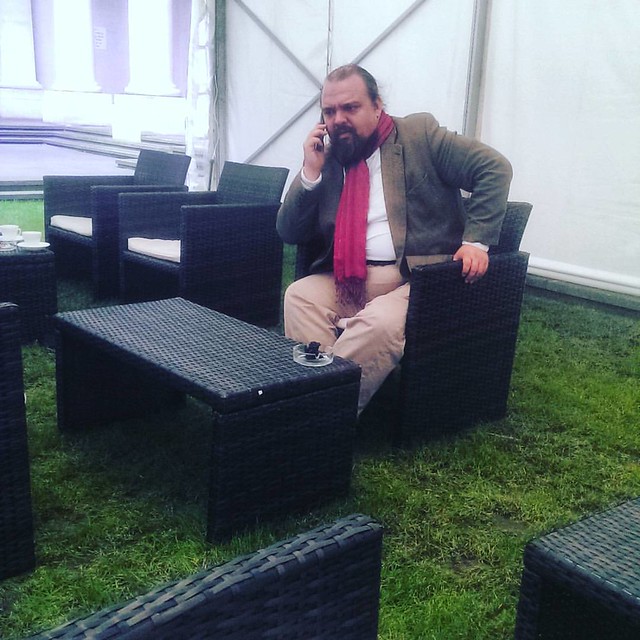 //embedr.flickr.com/assets/client-code.js
I’ve dropped in to the Ethereum Devcon1 at the Gibson Hall, slap bang in the middle of the City – at the junction of Threadneedle Street and Bishopsgate.  And Vinay and I sat in a marquee on the lawn (how surreal was your morning?) until we reckoned it would be more comfortable in the “Black Bar”.  I’m there now.  I ducked out of the session on “Monads and Comonads”. Because.

I’m mostly interested in the social and economic effects of blockchain tech especially the coming wave of white collar automation, so please piing me if you’re here and want to have a chat.  i’m not on-site all day every day but I will be dropping by regularly.