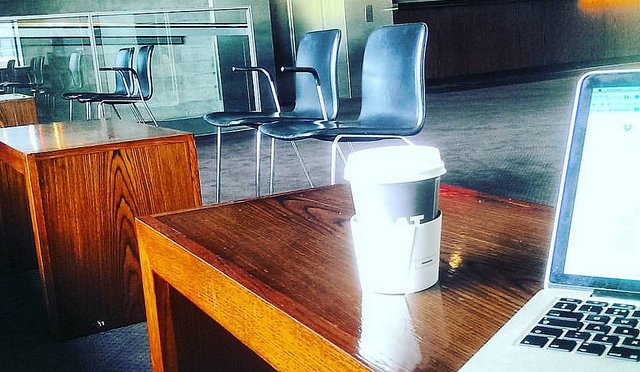 Five years ago, when I decided to go nomadic (and ended up living and working with others around the country for the next twelve months) it was largely because I’d realised that while I needed somewhere to live, the place I was in wasn’t working for me and it seemed that nothing in the market was really for me either. I didn’t want to move out of London for good, but I also didn’t want to stay. I didn’t want to live on my own and I didn’t want to move in with someone else (yet). I didn’t want to get a job and I didn’t want to work on my own. I wanted something else but I found it really difficult to articulate what it was. But I did find it over time. I found stimulation in the variety of people that I worked and lived with. I found rest on the road, knowing each time that I was moving again that new possibilities were opening up.
So now I’m settled, I like where I live, I’m married again, but I’m restless around work. I’m mostly working from the dining room table and sitting in coffee shops (or theatres!) and I’m feeling the need for a workplace that goes beyond the basic needs of desk, power, wifi. I need people and I need space to host in. I think of new invitations for open spaces and unconferences practically every day and they include working through some of the ideas around co-operative knowledge work with #tuttle that I wrote about before I went to America last month. I don’t know whether anything among the current crop of co-working spaces might be close enough – I definitely want to be part of a community rather than just another desk-renter.

I don’t know much more, but I was reminded by a wise friend yesterday that my best work comes when I express as much as I know and let others fill in the last 20% rather than trying to hide away until I have something finished.

So help me fill the gaps in this. Or y’know, put your earbuds back in and get back to what you were doing.