I lost the knack. And I started a job where I found it hard to do it consistently, so didn’t do it at all. And I got diagnosed with ADHD at the age of 56, which explained an awful lot.

And after the raging and choruses of “no wonder!” I’m now settling into being able to do a day job and do other stuff too, trying to work with my brain’s constant search for novelty and variety rather than against it.

But I’ve not been writing here or very much anywhere online. Posting to Facebook feels like it just creates an obligation to respond and engage. There’s fewer folk here and hopefully not as needy.

So I came up with a scheme. I made 15 little cards with “genres” on them “forms of expression” if you like, definitely not “content types”. They’re things I like making, don’t worry about it – oh and I’m not going to say what they all are until I’ve got at least one set of 15.

I’m pulling one out of the pile every day and making that the focus for today. And then writing a little bit about it. So it’s the old schtick of “do cool stuff and write about it on the internet” but maybe not as cool and definitely not with anything else in mind but a desire to ship something everyday. WordPress isn’t the perfect blogging tool (and the block editor hurts to use), but it’s what I’ve got. There’ll be a day for playing with blogging software, but it isn’t today.

Yesterday’s was “Animation”. So I made a couple of things. One was while I was having lunch, I made a little time-lapse loop of people going in and out of TK Maxx. I put it on instagram because that seems the easiest place to host things like that. Not ideal, but again not today’s battle.

Then after having a bit of a think, I spotted a picture I took in the woods a while ago of a tree trunk that someone had drawn a bear’s face on.

So when I came back I imported it to GIMP and made some blank layers on top. I faffed with pencil width for a bit to try to match the marker that the original was done with. And then I traced the bits I wanted to keep in this piece onto the first transparent layer. I do this in some contrasting colour so that it’s easy to tell which is the drawing and which is the original – for this I used a bright red.

When I was fairly happy with it and knew that the lines kind of joined up well enough, I got rid of the transparency and started filling in blocks of colour based very loosely on the original (I also made the “inner” of the ears bigger and the eyes bigger and solid black). That’s the point I’d got to when I sat back and thought I should write it up a bit.

Next I copied this, freehand and quite sloppily another three times so that I had four frames that look the same but are very slightly different. When turned into an animated GIF, the looping makes it look a bit more lively (it’s what I remember as the Roobarb & Custard effect, because I’m old). I’ve done some of this here before, but can’t be bothered to search back.

Anyway, now, shrunk down a little, it looks like this:

and that pleased me enough to let it be for another day.

(yes, I did write about it yesterday, but didn’t post here – progress not perfection) – stop moaning you’ll get another one in a minute and then you’ll be sorry.

I’m still playing with animations. There are a bunch directly from London Terminus and other British Council Films including some tracings.

Then there are the things like the one above which is a single image repeated several times with minor amendments and then looped. It’s called “boiling” apparently.

Iterations, circles, going round again just with a little difference.  If you haven’t seen “Inside Llewyn Davis” yet, please do.

I showed today’s batch to a friend and she said “It looks like something’s going to happen”. And yes it does, there’s a kind of constant winding up of potential. But nothing ever does. It just keeps going round in circles. Or something.

I sat down to do some more tracing tonight and thought I’d talk to the voice recorder while I did it.  Just a few reflections on what’s going on and how it all works for me.  Beware of the false ending just before 33 minutes.

Here’s the first frame that I refer to, I’ll post the animation when it’s finished. 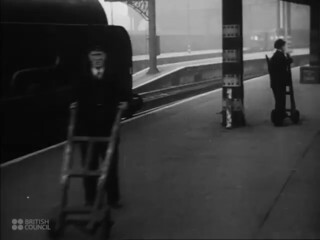