At today’s Blog Club we did an exercise to kick off with. We had ten minutes to write twenty-five titles of blog posts we’d like to write. I ignored the “like to” bit and just wrote as many off the top of my head titles I could think of. I came up with thirty-five. The thing is, when you let go of actually having to do anything with them, you can come up with a lot more than you’d imagine.

The next bit of the exercise was to choose five to actually write (one of which was “Ten blog posts I’ll never write” which I’ve turned into this one).

So that leaves the other thirty, which I didn’t want to throw away, so here they are:

On second thoughts, I probably will write some of these.

But what were the other five? 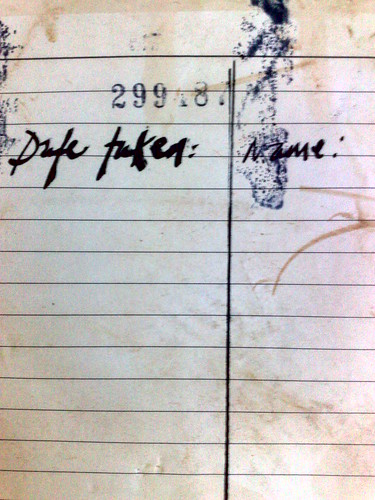 This post is intended as a starting point for online collaboration – let it be a launchpad for something you make yourself.

I think the first time I heard the word renewal it was in relation to library books. If you wanted to keep a book longer than the standard amount of time, past the date due that was stamped on a sheet inside the front cover, you needed to ask for that date to be extended and this was called ‘renewing’ or ‘a renewal’ otherwise, if you kept the book too long you’d be fined. You’d have to pay money to the library as a punishment for withholding the book from other borrowers.

However if you renewed it, the librarian could check that no-one else desperately needed that book right now and give you a further borrowing period. It was the loan then that was renewed. It was re-new-ed, made new again. The book was the same book, I was the same small child, but there was a new date to remember in the front of the book, the date that must not be forgotten or ignored or else it will cost you pennies.

Library tickets in my town were brown for children and white for adults. You could take and borrow as many books as you had tickets, because you had to hand them in when you had chosen your books and had them stamped.

Thanks Libraries and Librarians.

Take the picture, take the words and augment them, allowing them to augment you.

You can join in wherever works best for you – I’m publishing this on my blog, on the Tuttle Moonthly publication on Medium and on Steemit. I will endeavour to pull strands together and play them back in each of these places.

I don’t like it.  I don’t like writing about blogging, but sometimes it needs to be done to be cleared out of the way.  If I write on paper about writing on paper that seems OK because it’s only here on my table and it might just go in the bin or in that file of many ideas not quite finished enough.

I’m angry about it.  I’m angry about the way we, me too, I have let it slip away, have let others take the form and make it more like what they wanted to do in the first place.   And then decided that I needed to fit in with that.  We’ve made our newspapers into gigantic blog-like content machines, but none of them have much of the spirit of the people who write them, they’re just self-serving self-obsessed web-borgs.

A real person is in here, behind this screen, behind these words you’re reading.  With all the ups and downs and back and forth and painfully, oh jesus, p-a-i-n-f-u-l-l-y slow learning about life and how to do it and who I might be and how not to be who I’m not.

But even I’ve forgotten that and started to believe that what I write here needs to be a certain way, needs to deliver “my message” to “my audience”, get more hits, trigger more likes, avoid feelings, avoid criticism.  It doesn’t.  And it seems I need reminding of that every now and then.  Maybe you do too.

All right, thanks for listening, go back to what you were doing.

Interestingly, as I’m thinking about what you say and what you don’t and considering how to flesh out the story of me online, this weekend it was announced that the Audit Commission is to be abolished.

The Audit Commission was a big part of my working life. Did you know that? Probably not, there might be fleeting references to it, but to an extent, when I left in 2002 I drew a line under it as an experience and moved on. So as an interesting exercise in backstory writing (ie creating panels before the first panel – and of course a gutter between) what did I do there?

I arrived at the Commission’s Vincent Square headquarters on 1 August 1994. It was coincidentally the day that Commission staff were all moving back into VSQ after refurbishment, so it was a more laid back introduction than I’d expected and everyone else had a little air of being new themselves. I was there as a placement student for a year as part of my degree in Computing & IT at Surrey University.

My role as a student was to provide data analysis support to study teams in the directorate of Local Government Studies. I found myself allocated to a number of studies, but primarily a team just starting to look at the education of children under five. In the course of the year I got more and more excited by the prospect of understanding public services by collecting data and going out and talking to people.

The classic commission study contained a comprehensive and thorough narrative exploring the area of interest coupled with facts and analyses to support the argument. In addition there was usually an audit tool of some sort which would allow local auditors to carry out a value for money audit in the services affected.

So much of my time was spent following the study team around, carrying bags and getting to understand what they were doing and seeing where I could spot things that could be measured and interesting stories that might be told based on thbe data. It wasn’t up to me to come up with the stories, more to spot interesting avenues of investigation and then, if the study team agreed then to look further.

A running joke was that study teams always found there to be “significant variation between councils’ performance in X” for a number of Xs. Spotting variation was only the beginning. Explaining why variation occurred and what managers could do to improve their performance was much more important.

Not much was expected of us as students, but I loved bringing large sets of data together and seeing what you could tell from it. So I set about recording all of the data we were collecting, right down to attendance patterns in nursery schools into one big database that I could play around with.

The key output of this was a spreadsheet that allowed an auditor to compare the data they collected in an individual educational setting, or across a local authority, with national averages. My innovation was to present this data in the form of a “cost tree” for cost per child per hour.

A figure for cost per anything is usually one big number divided by some other big number, so in this case the total cost of provision divided by the number of child hours provided. Now this might vary for a wide range of reasons but by laying out the factors that go to make up the costs and those that might vary in the calculation of the total number of child hours (a policy decision, for example, to limit the number of hours 3-year-olds might get) it was much easier to see where differences arose.

It was very simple in the end but effective. It gave people something to think about, something to discuss and help them put a local picture into a national context. As well as helping the study team understand the dynamics of costs and differences between the costs of types of setting, it would help auditors to show councils where they might make improvements.

I went back to university for my final year, but was very pleased when the people in the study team lobbied for me to be recruited following graduation. But that’s a story for another day.

OK – what does this tell you about me? How does it help explain what happens next? Does it explain anything at all? Or is the gulf between this and what you know of me today too wide for you to suspend your disbelief that they’re the same people (*I* struggle..!). Do you want to give up, or carry on? Have I jumped too far from yesterdays post for you to understand what I’m trying to do here?

I remember reading, somewhere, something like: “As a blogger, if you’re not writing enough, it’s probably because you’re not reading enough” I don’t believe that’s true, I think it probably only applies if you’re the type of blogger who only writes about what other people have written, but somehow it got stuck, wedged into the part of my brain that somehow doesn’t like me sitting and writing and publishing stuff on the web and so it gets in the way every time I go anywhere near the “New Post” button.

The same bit of my brain that lures me into Google Reader and Twitter far too often. “I need to read a little bit more and then I’ll get down to writing.”

No. The only thing that gets me writing (and I love writing, I really enjoy it and I always feel good when I’ve done some) is sitting down and writing. Reading just takes up time, gives me little ideas that get squirrelled away in my head and rattle around like acorns. They rarely get out where they were supposed to go (here, on the blog) and just add to my levels of anxiety, depression and occasional psychotic delusion – which tend, to be honest, to get in the way of writing too.